Navigation:
150 metres off the shore of Wied iz-Zurrieq. It lies upright in position N 35’ 49.20 / E 014’27.04 stern closest to the inlet approximately 8 minutes normal underwater swim away from point of entry following a 270’ bearing.

Dangers: There could be strong currents

Wreck Statistics:
The vessel measures 109.53 metres in length, its beam is 15.50 metres and the height of the vessel from keel to funnel top is approximately 22 metres. This vessel is a single screw motor tanker.

For divers keen on wreck penetration the Um El Faroud offers a lot of passages with relatively easy exits. Such passages include the bridge hatches, cabins and galleys, hatches on the hull just below deck and for the more adventurous, stairs down to the engine room, a shaft that goes straight down from behind the chimney right to the engine room, and a passage from the engine room to a frontal compartment which leads above deck and out of the bridge front. The holds are easily accessible following the blast that wrenched open the deck when the vessel was still in the docks. The bows also feature a frontal compartment which can be explored.

Only eight months after the scuttling, the Um el Faroud wreck was already teeming with a wide variety of fauna and flora. Fish species include shoals of barracuda and squids, while the deck is swarming with thousands and thousands of bogues, which literally form living waterfalls down the wreck sides when approached. Plant life is also on a steady increase and most of the wreck is now covered with a variety of sponges.

Wreck History:
M/t Um El -Faroud was built in 1969 at Smith Dock Co. Ltd., Middlesborough  England and was owned by the General National Maritime Transport Company, Tripoli (GNMTC). It had been operating between Italy and Libya carrying refined fuel up to 1st February 1995. On the 3rd February 1995 it was docked at No.3 Dock of Malta Dry-docks. During the night of the 3rd February an explosion occurred in No.3 centre tank and 9 shipyard workers lost their lives. The vessel suffered structural deformation and was considered following inspection and survey, a total write off. It had been occupying this dock ever since the explosion until it was decided that the best option to utilize its remaining value was to scuttle her as a diving attraction and to start a new life as an artificial reef.

The diving community chose Wied iz-Zurrieq as the best site to accommodate this vessel. An Impact assessment was carried out over the seabed, and the site was marked. On 2nd September 1998 mt Um El-Faroud was towed out off Grand Harbour en route towards its final destination. After the ship was anchored on location and kept in position by means of a small MDD tug, Um El-Faroud went under after nearly a four hour wait  for the ship to fill up with sea water from 8 purposely fitted 4” sea valves. This scene was witnessed by thousands of people who occupied vantage points on the shore who undoubtedly paid their last respects to those 9 Maltese workers who died on that tragic night. 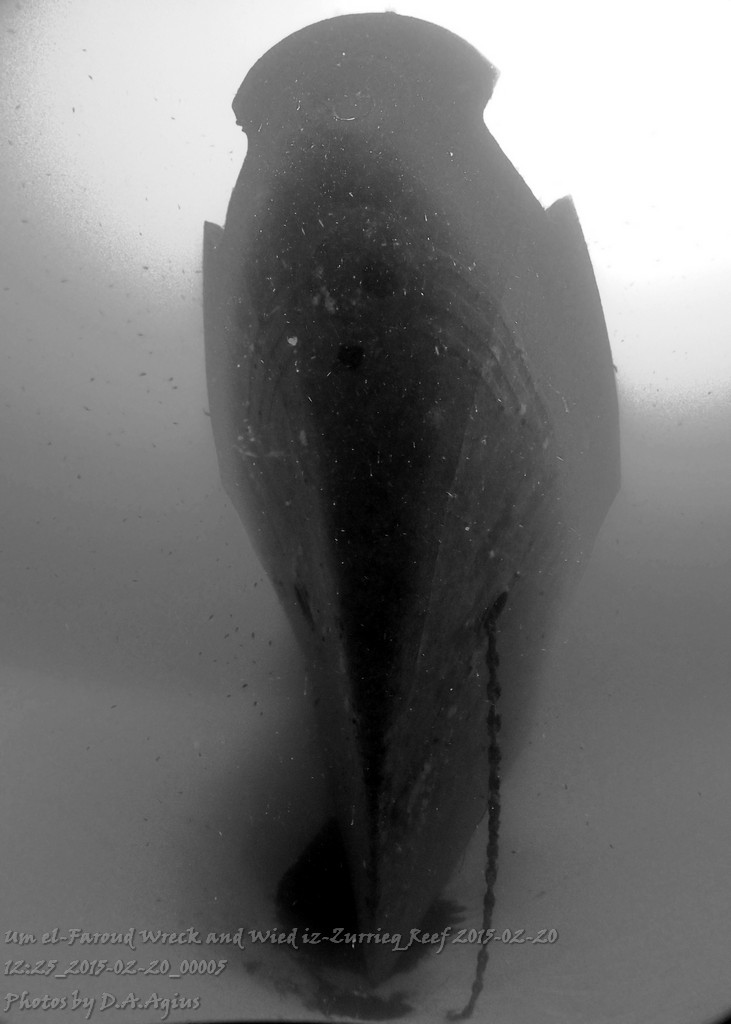 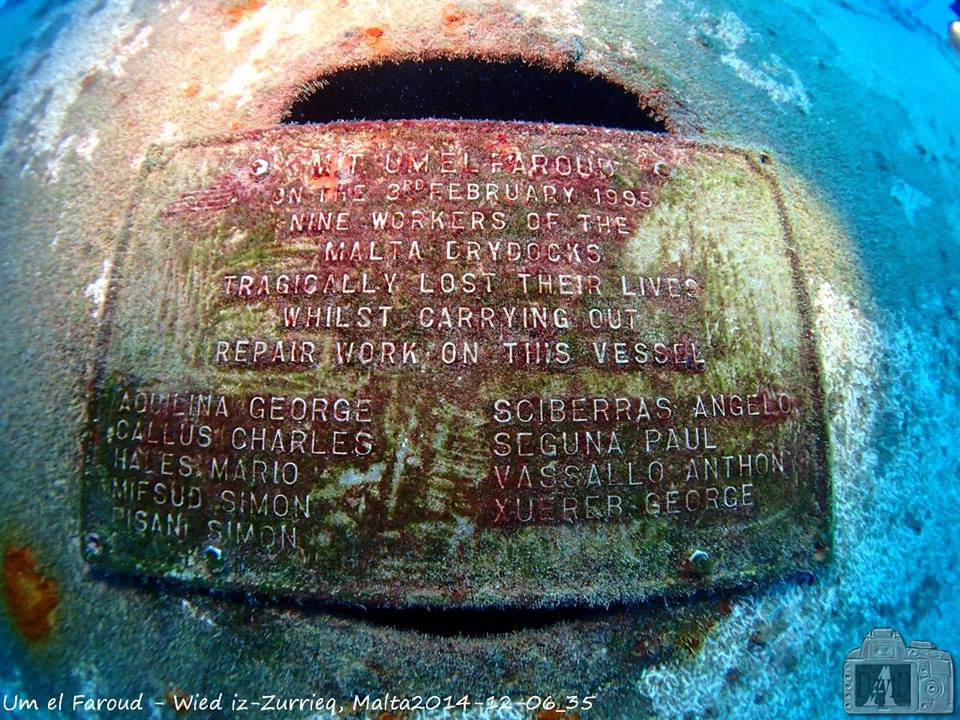 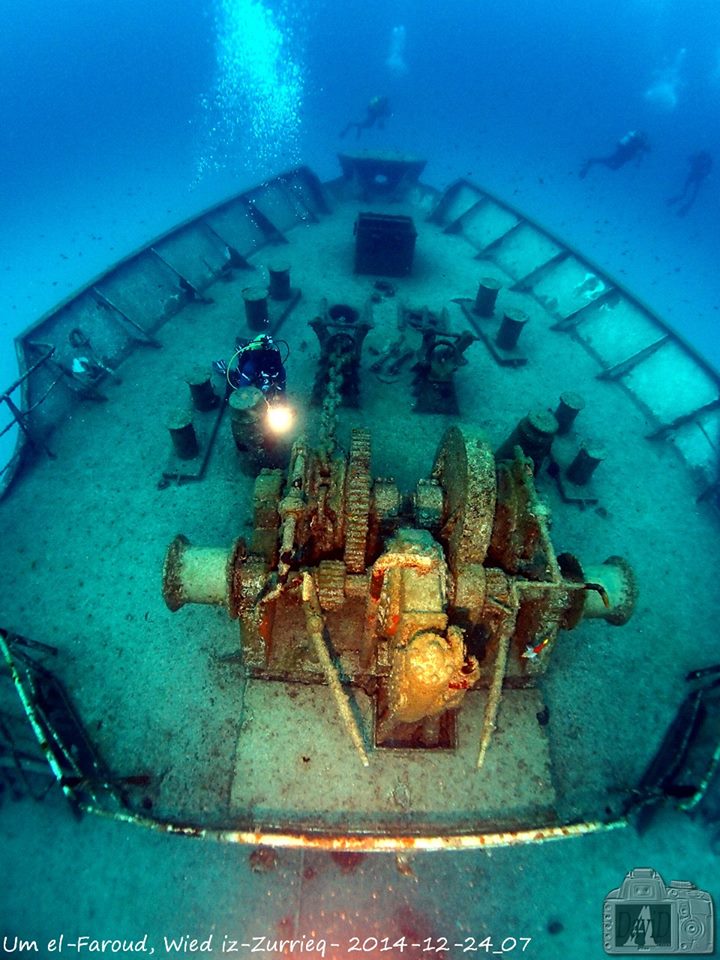 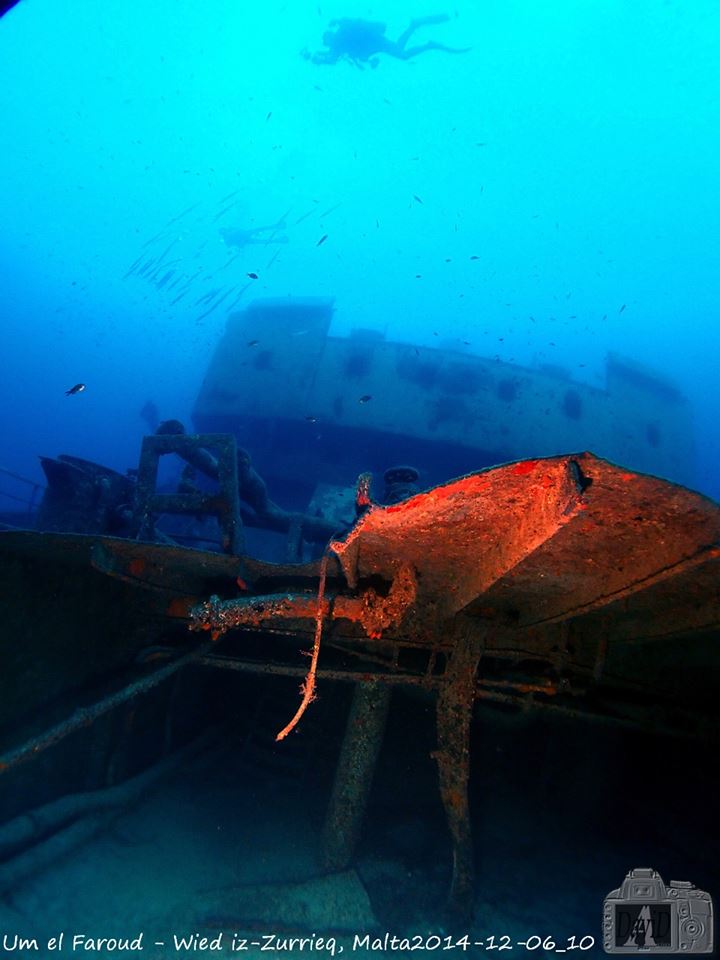 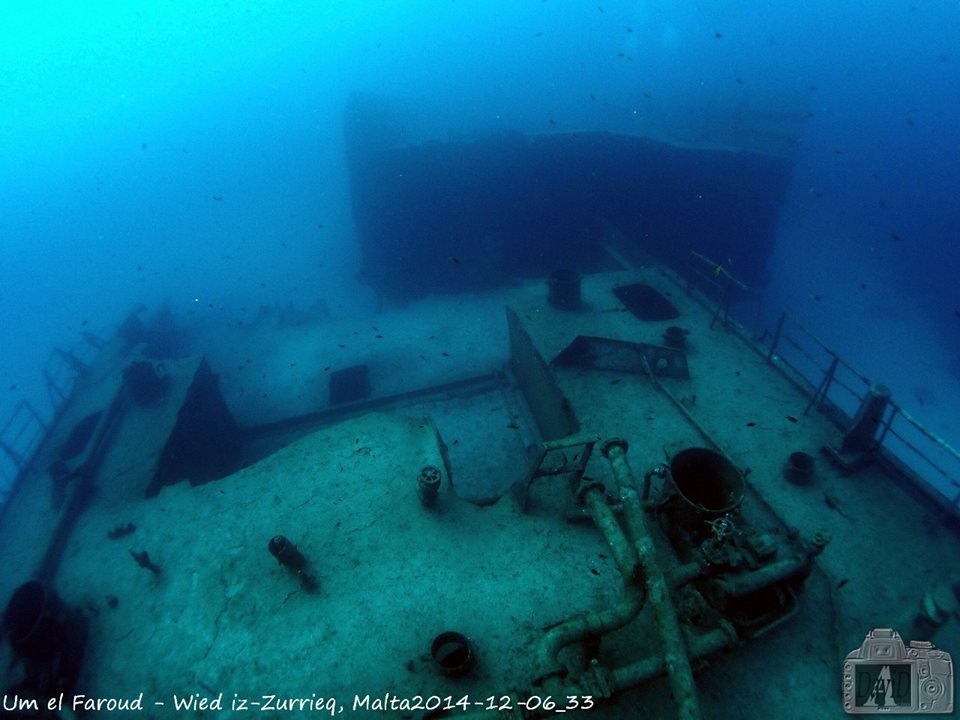 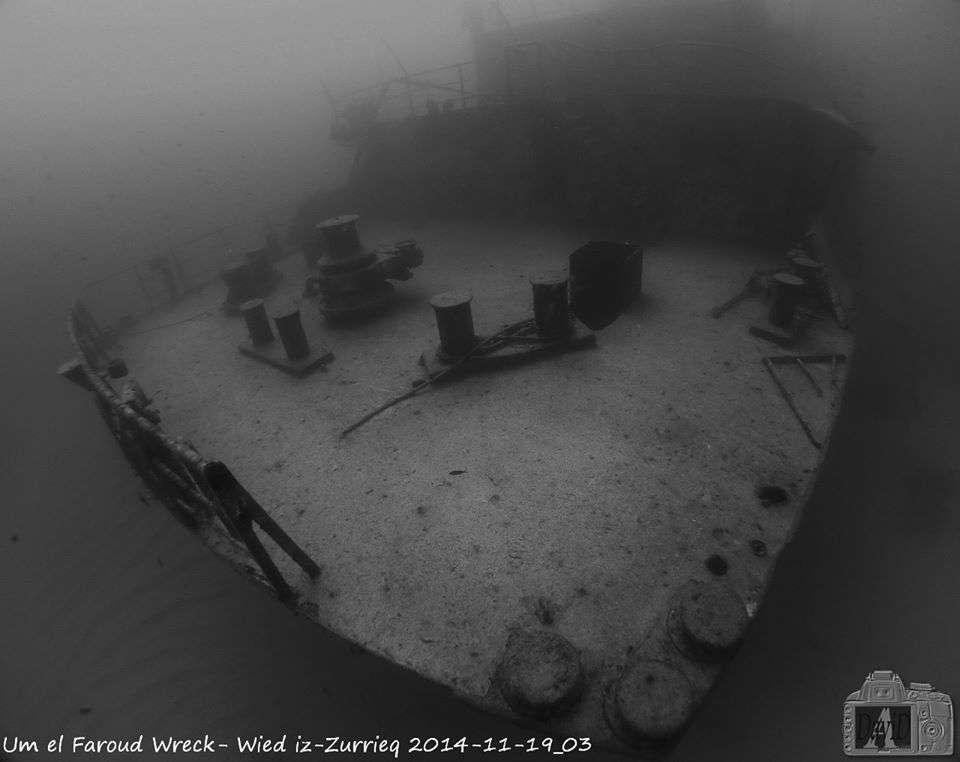 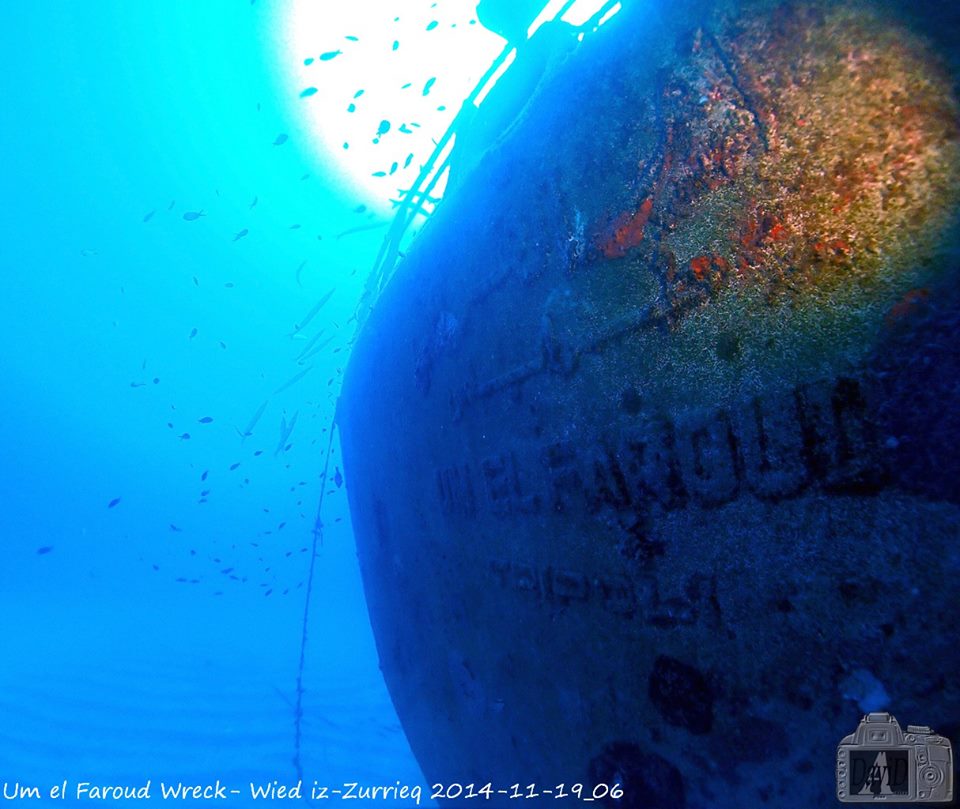 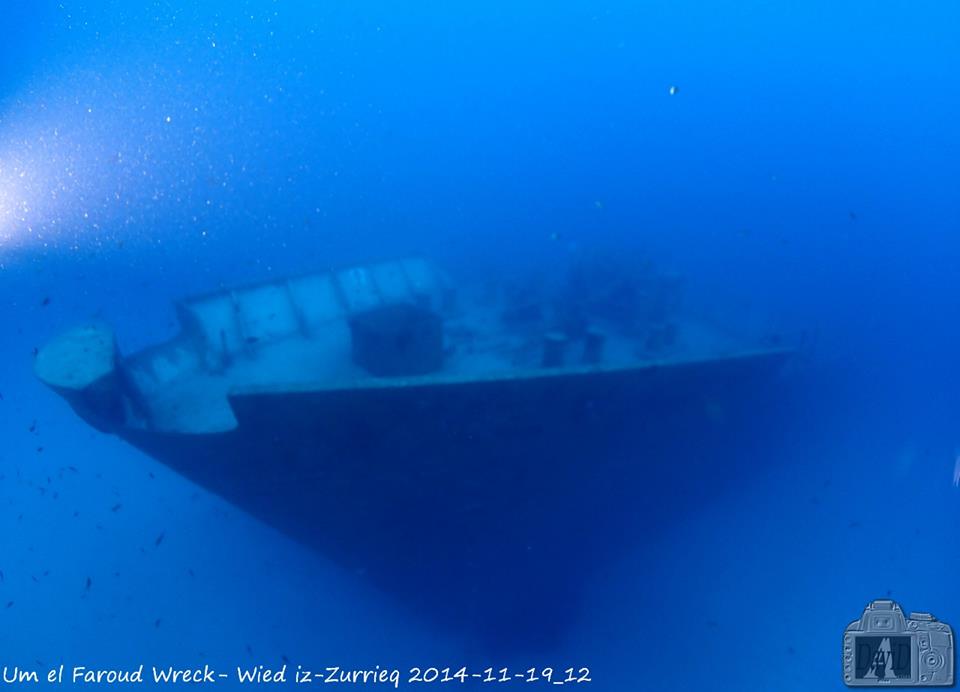 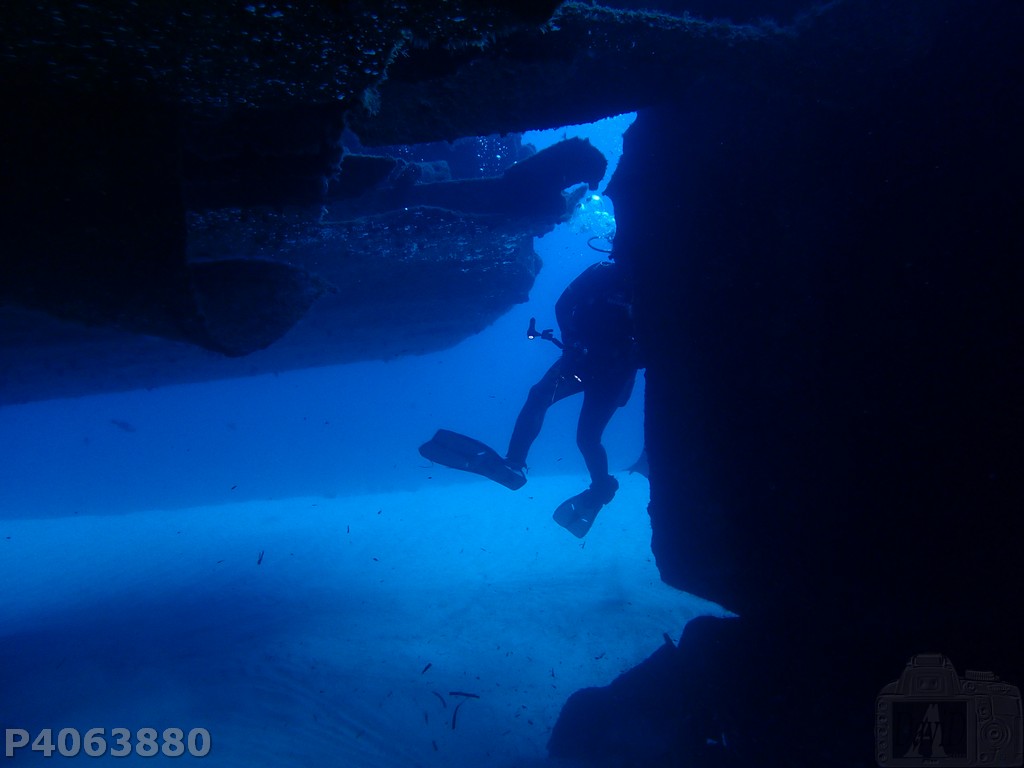